You cannot travel to Southern Germany without visiting…. HEIDELBERG!

The venerable city with one of the oldest universities in Germany

and the beautiful houses that date back to medieval times is the tourist hotspot to see! But the Erasmus delegations from Spain, Portugal and Latvia did not have a day off to do regular sightseeing. Instead of strolling along the Neckar and enjoying the view of the castle‘s garden, they had an appointment at the ”Sinti and Roma Documentation Centre“. Here they were welcomed by Emran Elmazi who is a member of the Roma community himself. He showed the students and their teachers around the exhibition and explained the Sinti and Roma genocide during WWII. This visit was especially for the Spanish delegation a highlight, because four of the six Spanish students also have a Romani heritage. But one does not have to be of Sinti nor Romani blood to feel with the discriminated group. The Documentation Centre really presents the lives and destinies of the Sinti and Roma well. Many pictures, letters and official documents bear witness to the cruelty of Nazi Germany and the suffering of a people. 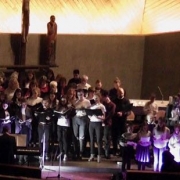 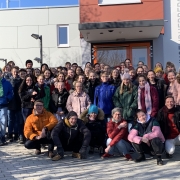