Waking up in a foreign country, having breakfast with a family that is not your own, a family that does not speak Spanish, Portuguese or Latvian, is exciting. Seventeen international students

had this experience this Saturday. They were not alone, however – they had their friendly partners around and even though many of the guests have never traveled before, they were not afraid, because the hospitality of the German families made them feel comfortable. There was not much time for a cozy family Saturday, as the Erasmus teams of the four countries already met at 9:30 a.m. for the official welcome. Finally, the moment had arrived: the four delegations came together!

Being motivated by interactive group games to break the ice, the 35 students opened the first mobility of the Erasmus+ project „Learning from the Holocaust“.

As if this project alone were not interesting enough, the first official day held some incredible coincidents for the participants. One the one hand, the Oscar-Paret-Schule had its annual day of the open doors – an official presentation of the school to the local public. That way, the international guests were able to explore the school and all it has to offer. On the other hand, and this is remarkable, the Erasmus team had the opportunity to get together with a group of young Israelis. The Erasmus+ project is not the only international cooperation the OPS organizes. The school is also very proud to have an exchange program with a school in Israel. Well, sometimes things just turn out to be perfect. As coincidence would have it, the visit of the Israeli students fell of the same week as the program with the three delegations from Spain, Portugal and Latvia. Of course, we did not allow this chance to pass and therefore the OPS organized a meeting of the Israel exchange and the Erasmus+ clubs, bringing together five nations for one afternoon. At first, it seemed impossible to break the ice and initiate conversations between the almost 60 students from five nations, but it succeeded. After the official greeting, words spoken by the principal of the OPS, René Coels, and a warm welcome from Mr. Goedekemaier, a representative of the city of Freiberg, Mr. Christian Rehmenklau created the context for the hours to follow. Mr. Rehmenklau is a member of the Stumblestone Initiative in Ludwigsburg. He and other citizens of Ludwigsburg keep the memory of Nazi victims in Ludwigsburg alive, by honoring and remembering the destinies of those who lost their lives during the Nazi regime. Mr. Rehmenklau’s speech was addressed to the Israelis and the Erasmus teams alike, raising the question of why it is important to remember the past. Then, the students were asked to answer this question for themselves in international teams. To see groups made up of Latvians, Spanish, Portuguese, German and Israeli students realize that „we are all the same“, was more than the coordinators could have hoped for.

To conclude they day, on a lighter note, project’s participants gathered for a dinner and traditional German bowling. 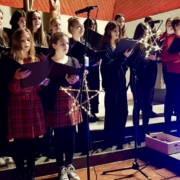 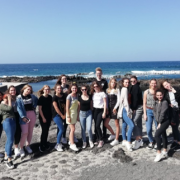